From the heroic to the everyday: An expanded framework or modern architecture in Singapore

Author’s note: This essay was originally written for the dossier submitted to docomomo (documentation and conservation of Modern Movement) International by the docomomo Singapore working group. With the URA landmark announcement on 9 October 2020 that the Golden Mile Complex is being proposed for conservation, this essay takes on a different significance. We hope that the announcement marks the beginning of the conservation of more postwar modernist buildings. Seen in this light, the essay might serve as a guide on the other significant modern buildings in Singapore that we feel should be conserved. 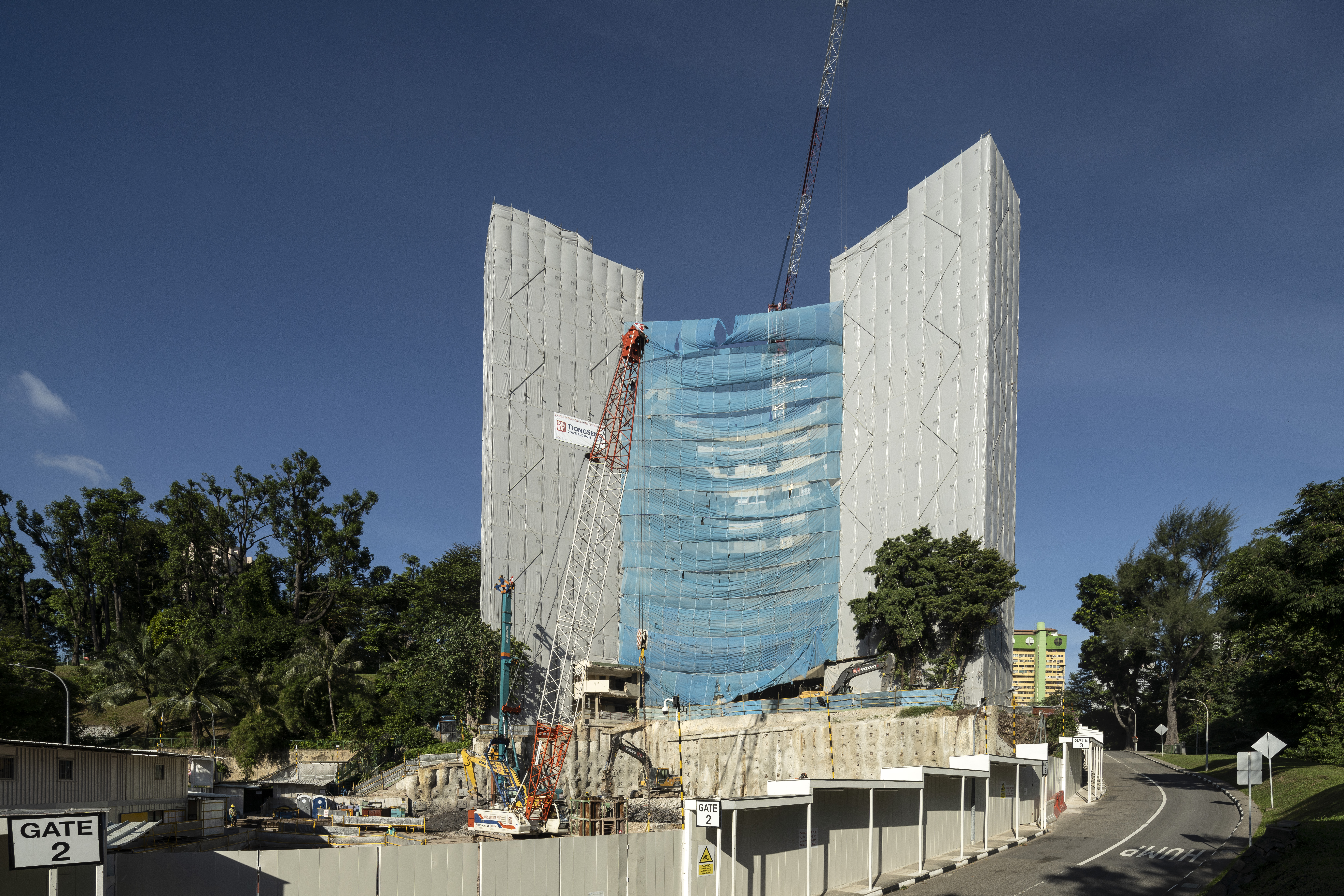 There is a large number and great diversity of buildings in Singapore that can be considered as modern. By modern, we are referring to not just architectural aesthetics but also constructional and environmental techniques, socio-economic processes, cultures, and political rationalities. The quantity and diversity are rooted in Singapore’s short but vibrant history variously as a colonial port city, a post-independent developmental state, and a contemporary global city. In this short introduction of the inventory list, we provide a brief sketch of how the shortlisted modernist buildings help to bring this rich socio-cultural history to life.

Singapore’s historical role as a major port city in Asia meant that it was nourished by different socio-cultural influences brought by people from around the world and thrived as an economically prosperous—albeit unevenly so—and cosmopolitan place. Early modern buildings—such as the Terminal Building at Kallang Aerodrome (1937) by Colonial Public Works Department (PWD), Chee Guan Chiang House (1938) by Ho Kwong Yew, Cathay Building (1941, largely demolished and redeveloped except for the token preservation of a small section of the original façade) by Frank Brewer—capture some aspects of this vibrant colonial modernity.

Transnational flows of ideas and influences on the modern built environment continued in the postwar and post-independence eras as young local architects returned from their overseas studies with fresh ideas and sought to contribute to decolonization and nation-building. Major modern buildings erected during this era include Asia Insurance Building (1955) by Ng Keng Siang, the National Theatre (1963-1986, demolished) by Alfred Wong and the Singapore Conference Hall and Trade Union House (1965 and insensitively renovated in 2001) by the Malayan Architects Co-partnership. From 1963, batches of architects trained at the first (and until a few years ago, only) architecture school graduated and begin to contribute to post-independence development. Often working with the overseas returnees, these architects came to co-produce a number of significant large-scale buildings as the city-state of Singapore underwent radical territorial revolution with rapid socio-economic transformations. Key buildings of the period that were erected as a part of state-led programmes of urban renewal and modernization include People’s Park Complex (1973, with the shopping podium opening earlier in 1970) and Woh Hup Complex (1973, later renamed Golden Mile Complex) by Design Partnership, Jurong Town Hall (1974) by Architects Team 3, the former Subordinate Courts building (1975, now the State Courts of Singapore) by Kumpulan Akitek,  Pearl Bank Apartments (1976-2019, demolished) by Archynamics Architects, and the former Public Utilities Building (1977). We call the above outstanding individual modern buildings our “heroic modernism”.

Besides the heroic modernist buildings, we are also proposing another category of buildings that is equally, if not more, significant for the understanding of modernism, and its attendant modernity and processes of modernisation, in Singapore. Singapore is one of the most thoroughly modernist cities in the world. An overwhelmingly large proportion of its built environment was constructed after it attained self-government in 1959. The city centre is primarily a result of urban renewal carried out from the 1960s. Around 80 per cent of the population resides in outlying satellite new towns built from around the same time. Both of these were the products of the “Ring Plan” first proposed by the United Nations planning experts and later implemented in a series of Concept Plans. Taking the whole island as a planning unit, these plans radically transformed the territory of the city-state and how Singaporeans live through what Rem Koolhaas characterized as the tabula rasa mode of development typical of modernism. Yet unlike many places around the world, modernist buildings in Singapore are not stigmatized. In fact, the modernist built environment of Singapore is generally accepted and even well-loved by its inhabitants. Though well-loved, most of these modernist buildings remain unknown and underappreciated for various reasons. One of reasons might be that they are so ubiquitous that they are deemed ordinary and thus taken for granted. We call these well-loved but underappreciated modernist buildings “everyday modernism” and we posit that they should be carefully documented and selectively conserved.

Post-independence everyday modernism has its roots in the colonial development and welfare plan carried out in the immediate postwar years. To make up for its previous neglect of the social welfare of the colonized population and in face of international and local pressures, the colonial government begin building public housing, schools, hospitals and clinics at a large scale from the late 1940s to the late 1950s. Many significant buildings in these public realms were erected as a result. In housing, these included flats at Upper Pickering Street (1952-c.2005, demolished), Forfar House (1956-c.1996, demolished), and flats at Dakota Crescent (1958, partly gazetted for conservation). The postwar housing programme came about in part due to the shift in official colonial housing policy in 1938 following the publication of Weisberg Committee’s Report in the same year. Tiong Bahru housing estate (c.1938-1941), which was the first housing estate to be constructed after that policy, has a number of fine prewar modernist buildings that have remained almost entirely intact.

The post-independence government continued these social welfare building programmes at an unprecedented scale. The Housing & Development Board (HDB), in particular, played a central role. It built new housing estates that house around 80 percent of Singapore’s population today. Besides housing, it also planned and designed most of the amenities, such as the town and neighbourhood centres, playgrounds, swimming pools, mosques and community centres. Since these buildings are often planned as a part of larger series rather than as singular entities, we take a typological approach to selecting both representative and exceptional examples to include in our inventory. The slab and point blocks are probably the most basic and common housing typologies. Among the more interesting examples are the double-curved public housing block along Queensway (1973), the first point blocks at 160 Mei Ling Street (1970) and the first and only circular point block at Ang Mo Kio Avenue 2 (1981). Some of the more noteworthy amenities HDB has built over the years are Toa Payoh Town Centre (c. 1972, extensively renovated from the c.1990s), the dove and dragon playgrounds (first released in 1979), Ang Mo Kio Swimming Complex (1981), Darul Aman Mosque (1986), and the former Bukit Ho Swee Community Centre (1982, closed in 2000s and currently vacated).

The other major government agency that planned and designed many public buildings was the post-independence Public Works Department (PWD, corporatised in 1999). For four decades, the PWD developed a series of standardised designs for schools. Numerous attempts were also made to diversify the designs. In the process, the PWD created numerous school buildings that shaped the lives of many Singaporeans during their formative years. We have included a number of schools in this dossier as illustrative examples.

It is obviously impossible to capture the entire range of modernist buildings in Singapore within this short introduction and the list of shortlisted buildings that follows. What we hope to achieve is instead to provide a sense of the general outline of modernism in Singapore. In summary, we note the presence of two types of modernism—heroic modernism and everyday modernism—in Singapore. These are not separate nor mutually exclusive types; rather, they are interdependent categories that help to delineate some differences between singularity and seriality, known architects in private sectors and anonymous architects in public agencies. In doing so, we emphasize the equal importance of attending to the latter form of rather underappreciated modernism in Singapore. We also stress that modernism in Singapore should be seen in continuity, from colonial to post-colonial, from post-independence to the contemporary. It is this historical continuity that tells the manifold stories of modernisation and modernity of this cosmopolitan city-state. It is this sense of the present being sedimented from the past that allows us to think of the continual relevance of our modern past. Much more research, educational and advocacy work is still needed to continue to strengthen and enrich our understanding and appreciation of modernism in Singapore. It is our hope that the Singapore chapter of docomomo will be further empowered to engage in these activities once it is officially formed.